We all think we know a reach when we see one and it's easy for that dickhead draft grade guy to call owners out on a early draft pick but how do we quantify a reach?  This post aims to answer that.  I gathered our 2014 draft selections in order and bounced those up against the ESPN top 300 rankings to see what picks earned or lost the most value compared to the ESPN ranks.  Some of you might not use ESPN rankings as your preferred war room reference but I would say a majority do and their ranks influence our draft in the fact that the top remaining ESPN ranked guys are always the most visible atop the available player list.  In the end, the ESPN rankings might not mean shit and some rounds you need a WR3, for instance, and am willing to grab one no matter what so it may compute this pick as a reach but it was still the prudent decision by the fantasy GM at the time.   Like all statistical analysis, there are holes to poke into what is truly a reach and what was not but this should shine a little light on the best and worst value picks we had on draft night.  I'll try to save everyone some time and take a broad approach to this and hopefully this can at least help you point and laugh at the reachers and pat yourself on the back for a high value draft night.

We'll first take a look at the top 20 value pick on draft night. 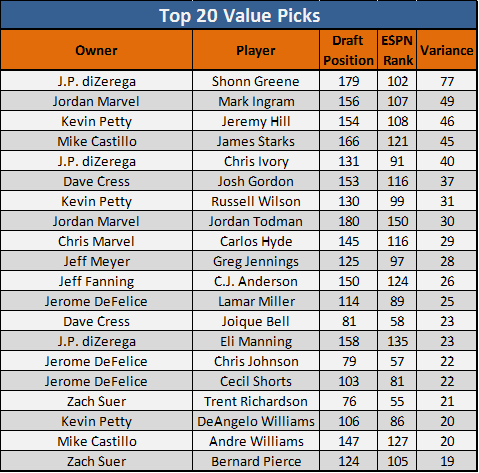 Shonn Greene is the A1 example of a dude you can wait on.  A player that will lose some carries to a more publicized rookie, a player that hasn't done much with his chances, and an overall boring runner.  He will score some touchdowns and does represent some value but he was taken at almost seven rounds later than what ESPN projected, which is funny.  J.P. was the man to pull the reluctant trigger.  There's a definite theme here with a bunch of running backs that will be used on bye weeks and injury replacements mostly.  ESPN wants you to stack up on you backs before you fill out every starting position and our league does not do that in general.  A few of these guys will make their owners look very smart, though.


Next, let's look at the longest reaches. 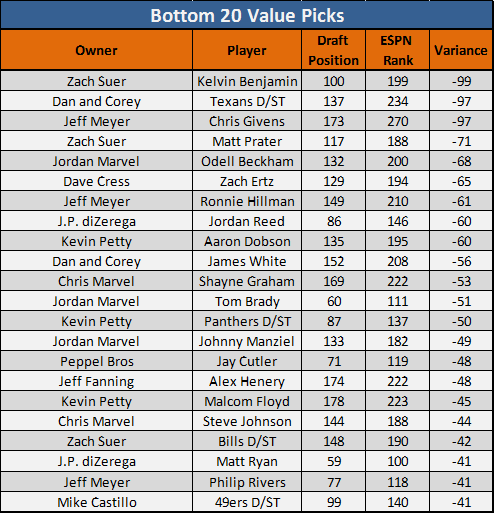 All of D12 was confused as fuck when Suer grabbed Kelvin Benjamin and this is proof as to why.  He was taken more than 8 rounds earlier than ESPN projected him to be.  He might turn out to be a decent WR3 and Zach might have the last laugh but this is a player that Z could've waited on another 4-5 rounds at least to grab.  If he doesn't work out, what a boner pick.  Zach's Matt Prater pick is also high-larious at the time and yet another example of a player getting picked too early for a benefit that will be minimal at the end of the season.  There's not really a theme to these picks in terms of position but we are starting to see the same owners on these lists and I can imagine these players are all dudes that we targeted before the draft and just said "fuck it, I'm getting him" a round or five early.

Let's now take a look at the positions that cause us to reach the most. 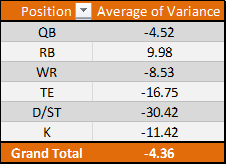 This table is showing the average amount of picks we take a certain position player compared to the ESPN rank.  D/ST ranks the highest for the position we take earlier than we should, which isn't a shocker, really.  Everyone has a tendency to grab one once they've filled our their roster.  We are taking them a couple rounds earlier than ESPN would like.  We can get the most value from running backs, which you all expected from the top 20 table you looked at earlier.  A lot of RB3's, RB4's, and RB5's can be found at a nice value.  The QB's were not taken a whole lot earlier than expected, which is somewhat surprising.

And now, let's see which owners got the best and worst values from their draft night. 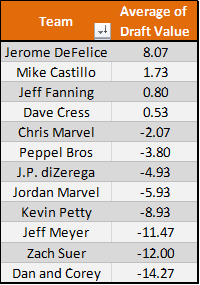 This table separates the reachers from the patient owners.  Jerome may or may not be encouraged by this table as he never went nuts to grab someone he wanted and picked players almost a round later than they should've gone.  Jerome also loves to grab bench running backs, who come at a pretty nice value.  Jerome also didn't wait until the 10th round to grab some jamook quarterback like he usually does.  J.P. made a fair amount of reaches overall but none all that egregious on draft night.  Meyer, Dan, Corey, and Zach have some explaining to do as they premature ejaculated all over their laptop once they saw a sleeper.  I mentioned that Fanning grabbed some flawed players on draft night but he might've gotten some manager's specials like you see at the grocery store for a cheap price and the same taste.

And finally, lets see who reached the most when they reached for their keyboard. 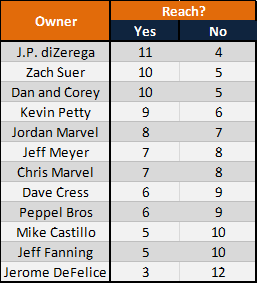 This table used a simple formula of determining a reach by seeing when you took a player and if it was before or after ESPN suggested or not.  J.P. had the most reaches out of everyone but you'll see his reaches were of the small size when you take a look at his roster.  This table kind of speaks to an owner's philosophy on draft night and if they're willing to wait for whoever falls to them or if they want to grab their guys early and often.

A couple of random notes from the commish:


Alrighty, gents.  I hope we learned a little bit today and if you want to give any of these owners a post-draft REEEEAAAAACCCCHHHHHHH!!!! text after reading this, please do so.
Powered by